A Thomson/Reuters article published earlier today cited data indicating that “e-books account for about 30 percent of the U.S. book market and 20 percent of sales in Britain, but are still negligible elsewhere.” However, I predict that results in France, Germany, India, the Netherlands, and Scandinavia will change significantly over the course of the next decade.

I have recently read Jessica Yadegaran’s article, “Self-publishing or Vanity Press? The Answer May Surprise You,” dated 2 September 2012 and published in the Contra Costa Times. The short text discusses the enormous success of Tina Folsom, yet another author who “gave up” on the conventional route after collecting a string of rejections (over 30) from both agents and publishers alike. Since December, 2010, Folsom has earned $1.1 million selling digital books online – and is no longer even interested in landing a deal with a major publisher!

It would seem the writing is on the wall. Presumably, the agents, editors, and others are able to figure out what will sell. Obviously – once again! – they missed the mark.

As I have quipped before, the New York Literary Mafia are clinging to a model that has failed repeatedly. I see no reason whatsoever to suffer the “slings and arrows” of these “know-it-alls” when an expedient like Kindle Direct Publishing is so readily available!
Posted by Lenny at 6:10 PM No comments:

Interview With Alexander Markov Is Published

My article, "In the Footsteps of Paganini:  An Interview with Alexander Markov," has been released by Stay Thirsty Media.  You may access it most expeditiously through this hyperlink:   http://www.staythirstymedia.com/201209-073/html/201209-cavallaro-markov-int.html. 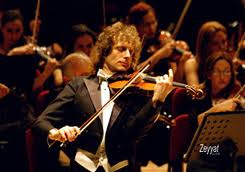 I must append that it was an absolute pleasure working with Alex.  Moreover, I truly believe what I asserted in my introduction -- that his performance of Paganini's music is without peer.  The article includes Markov's video-streamed performance of the composer's famous "24th Caprice," and I think most viewers will agree that Alex complements a masterful interpretation with an absolutely striking stage presence.  Enjoy!